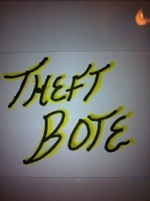 The legal doctrine of Theft-Bote simply put, is the acceptance of a payment from a thief in exchange for an agreement not to pursue prosecution; this is known as compounding a crime. It is a situation where for example, a party robbed not only knows the felon, but also takes his goods from him upon agreement not to prosecute. Such action is said to make a man an accessory and the crime is punishable by a fine and imprisonment.

Even the act of advertising a reward for the return of stolen goods, with the promise of no further inquiries or questions asked as long as the goods are returned, will subject the advertiser and one who prints the advertisement to a fine. (See 4 Bl. Comm. 133-4). At Common Law, the owner’s repossession of his goods, was not of itself enough to make him criminally liable; however, it is his act of obtaining the chattel under agreement to forgo prosecution or to withhold evidence of the larceny that is held illegal.

It is a Common Law offense for anyone to obtain anything of value upon an agreement not to prosecute in regard to a felony. In ancient times, such an offender was considered an accessory and the cases were limited to felonies but nowadays, such limitation has eroded. To take a reward to forebear a criminal prosecution for a misdemeanor was indictable at common law, with an exception to offenses considered private injuries or of low grade. (See State v. Carver, 69 N.H. 216, 39 A. 973 (1897))

At this juncture, it is essential to differentiate between a private offense and a public one. A criminal offense is a public wrong and an act which constitutes a crime may also be a private wrong, such as in the crime of larceny and battery or be a public wrong, such as joining enemy forces in the time of war or making a fraudulent misrepresentation in an income tax return.

To better understand take the following scenario, David’s daughter Kathy, was raped by his brother John; John pleaded with David not to report the crime or prosecute because it is in his words “a family matter,” he promised to relinquish 10% of his inheritance to David in exchange. Can David accept such a deal and not be criminally liable? The answer is No, why? Because John’s action is a criminal offense, a felony and therefore, a public wrong; in so far as an act is a private wrong, the one offended is free to reach a settlement with the offender or forgive him without restitution. However, not the case with what the law has labeled a crime.

In the case above, for David to do as John says, would be to compound a felony (rape) and to be an accessory to what the law has declared a public wrong and therefore illegal. Note however, that there are statutes that allow the compromise of a misdemeanor for which the one offended has a civil action, unless there is a situation of aggravation which in other words is deemed criminal in nature. (See West’s Ann.Cal.Pen.Code §§ 1377-1379 (1970).

The fact that two parties decided to get married despite allegation of seduction, will not stop prosecution for rape. (See III. Rev. Stats., c. 38, § 490 (1957), overturned 1961. Nonetheless, there are statutes that allow settlement by the parties such as when a party violates the statute that penalize writing a bad check, unless it is paid within five days after written notice; (See Tenn. Code Ann. § 39-1960 (1975).

The conclusion and the basic principle here is that a private individual, cannot condone a public wrong or what has been declared criminal in the eyes of the law. While certain private wrongs may be subject to settlement by the parties, public wrongs are crimes against the public and a matter for the public to decide through its justice system and the rule of law.

Like Loading...
‹ THE WARRIOR IS SUICIDAL: Army Suicide And The War Inside
DRUNKARD IS EXCUSED: ALCOHOLISM AS A DEFENSE IN CRIMINAL LAW ›