SYRIA INFERNO, WHAT KEEPS ASSAD GOING IN A WAR WITHOUT END 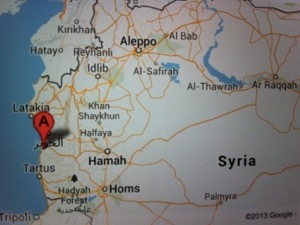 More than 93,000 people feared dead, about 1.2 million internally displaced and thousands in neighboring Turkey, Jordan and Lebanon as refugees. With the regime and opposition unwilling to reach a compromise, it is no understatement to say Syria, has entered into the abyss of a civil war. The war that began more than two years ago shows no traces of coming to an end. Predictions of a crumbled Assad regime, is far from reality, and despite Western support for the opposition, Assad is standing and willing to fight to the end. The issue, what keeps Assad going and why is the regime able to survive despite rising antagonism towards it?

Foremost, the world or better to say coalition of the willing has failed to reach a consensus on ending the Syrian impasse. The West with many Arab nations have lost cause and it seems there is no clue on best way to end the killings in Syria. Various meetings took place since the beginning of the war but with Russia and China on the sideline and unwilling to budge on the Syrian regime, the war is far from ending and thousands more may die before peace comes to the disturbed nation.

One critical mistake by the international community is the failure to begin a no-fly zone in Syria. The lack of agreement on a no-fly zone, allowed the regime air superiority over the opposition. Daily bombardment of strategic places held by the opposition, made it possible for the regime to hold on, as it continues on its wish to stay in power come what may. This week, the forces loyal to President Al-Assad, seized all the Qusayr area in western Syria, a region considered the last rebel foothold, though, this is not the decisive battle of the Syrian civil war.

In response to how the United States and the West handled the Libyan crisis, Russia and China, backed away from a UN resolution that could have led to a no-fly zone in Syria. Moreover, Russia is adamant on having the regime play a role in a new Syria to which the opposition disagreed. At the beginning of the crisis in Libya, the Gaddafi regime was able to withstand all oppositions in the country until a UN resolution backed by all permanent members of the Security Council, led to a no-fly zone and eventual demise of the Gaddafi regime. Had the same been done in Syria, the opposition could have gained needed leverage to end the regime. Due to refusal by Russia and China at the UN Security Council, Syria has become a research guinea pig to test how far a regime can withstand opposition, without both nations’ support to depose the leadership.

Iran has injected itself in the Syrian war. The decision to play active role in the crisis, not only help the isolated regime in Tehran divert global attention from its nuclear program, it is also helping to hold one of the last stronghold of support the Iranian regime has in the Middle East. Iran’s support with weapons coming into Syria couldn’t have come at a better time when the Assad regime is striving hard to hold power. Tehran knows the only way to overcome a Sunni takeover in Syria is by a coalition of Alawites and Shiites against Sunnis, exactly what the Assad regime needs to survive possible opposition takeover.

Decision of the European Union to lift arms embargo on Syria, a move that would allow the opposition access to weapons, is working to the advantage of the Assad regime. So far Russia has responded by sending arms to the regime in honor of Moscow’s previous contract with the Assad government. Russia said the EU move will not lead to a quick resolution and therefore, Russia has a valid argument that it too must honor the first contract, to send arms paid for by the regime in Syria. The receipt of Russian arms, flow of weapons and money from Iran keeps the regime standing thereby, helping to prolong the war.

The Obama administration is unwilling to send weapons or commit American troops in Syria. Decision of the U.S. government to play a limited role in the Syrian crisis, came as a blessing to the Assad government, one major reason the regime is still standing. Though, the U.S. did not commit foot soldiers in Libya, American fighter planes flew short missions and dropped bombs that destroyed Gadhafi’s war machine and helped opposition’s final takeover of the country. The regime has now been accused of using chemical weapons, crossing the ‘red line’ set by the Obama administration. It remains unclear what the U.S. would do, in terms of military aid to the opposition. Without full support from the United States, the war would be unwinnable for the opposition and with Russia and China against plans to depose Assad, the Syrian regime hold all the aces to victory.

Hezbollah fighters have entered Syria and are fighting along with the regime soldiers against the opposition. Hezbollah has the best-trained Jihadists in the world and while the West and the United States consider it a terrorist organization, it receives financial support and weapons from Iran, Syria and some Arab nations that see it as a freedom fighter against Israel’s oppression of the Palestinian people.

Hezbollah’s support for the Syrian regime helped the Assad government’s retake of Qusayr an important region formerly in opposition’s control. The organization has since called liberation of Qusayr, “a major blow to Israel, and a proof that the gamble to topple Syria is a delusional plan.” With the capture of Qusayr, the fight is on to take Aleppo. Syrian citizens and rebel fighters crossing the border to Turkey in recent days, say they have seen Hezbollah fighters fighting in villages and suburbs near Aleppo. Aleppo controls the road leading north from Syria to Turkey, a main source of arms shipment to the rebels.

Turkey a staunch critique of the Syrian regime is now engulfed by crisis of its own. Since the beginning of the war, the Turkish government called for Assad to step down after report came the regime was killing its citizens. Turkey also opened its doors to Syrian refugees, a move that caused the Assad regime to blame the Turkish government for fueling the conflict in Syria.

A conflict spillover to Turkey is what the Assad government wants. With Turkey dealing with demonstrations within its borders, it is unable to focus on Syria. Turkish Prime Minister Tayyip Erdogan, is now concerned about defusing the opposition in his country, a diversion that in many ways is helping the Assad regime to keep power. Lebanon is beginning to feel effects of the Syrian crisis and the U.S. government has warned the war might spill over to Jordan, which could turn the region to a war zone.

Resolving the Syrian conflict would need a global consensus on better ways to end the fight. Russia, China and the United States must come to a solid agreement on best way forward. With Russia supporting the regime and the U.S behind the opposition, it would be impossible to reach a compromise. The international community must not flood Syria with weapons that terrorist might seize and use to carry out attacks around the world. It is undeniable Assad is a damaged leader however, to end unnecessary killings, both parties must come to the table to find a way forward for Syria.