DOMA CRUCIFIED, DEMISE OF THE DEFENSE OF MARRIAGE ACT 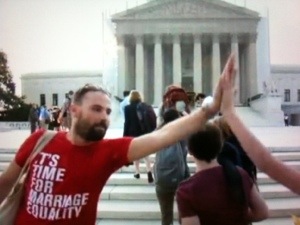 In what many consider a demise of the 1996 Defense of Marriage Act (DOMA), the majority opinion stated: “The Federal statute is invalid, for no legitimate purpose overcomes the purpose and effect to disparage and injure those whom the state, by its marriage laws, sought to protect in personhood and dignity,” wrote Justice Kennedy. “By seeking to displace this protection and treating those persons as living in marriages less respected than others.”

Under DOMA Pub.L. 104-199, 110 Stat. 2419, enacted on September 21, 1996, Federal Law defines marriage as a union between a man and a woman and clearly states that no U.S. state or other political subdivision, could be required to recognize as a marriage a Same-Sex relationship considered a marriage in another state. Many have criticized the law as trying to recognize only the established institution of marriage or heterosexual relations, while at the same time discriminating against Gays and Lesbians.

Advocates of Same-Sex marriage want DOMA declared unconstitutional because the law discriminates against Same-Sex couples and that it violates the equal protection guarantees of the 14th Amendment. The law excludes Same-Sex couples from Federal Rights like; survivor benefits from Social Security, family insurance benefits, and joint-tax filings that traditionally are open to heterosexual couples.

On February 23, 2011, U.S. Attorney General Eric Holder along with President Obama said “a more heightened standard of scrutiny” is required for sexuality based classification and therefore, that section 3 of DOMA is unconstitutional. At the time, the Supreme Court refused to take the case and no Federal Court of appeals struck down the law for if one had done so, the U.S. Supreme Court could be forced to take the case. Many thought the fate of DOMA, could hinge on winner of the in 2012 election. When Obama got reelected, advocates of marriage equality, saw an end to the Defense of Marriage Act.

Equal protection arguments over the controversy surrounding gay marriage centers mainly on whether laws against Same-Sex Marriage deny gays and lesbians the equal rights guaranteed to every U.S. citizen irrespective, of race, color, national origin and sexual orientation. Key issue: Does Equal Protection Clause of the 14th Amendment guarantee gays and lesbians the right to marry?

Since 2003, many states ratified Same-Sex Marriage on Equal Protection grounds. On February 12, 2004, the Mayor of San Francisco Gavin Newsom ordered the issue of marriage licenses to gay and lesbian couples. Soon after, the controversy became a national debate as supporters of traditional marriage fought in court to strike down the Mayor’s decision. In 2008, a measure restricting marriage to heterosexual couples only got put to a vote that narrowly passed by 52%-48%. But on February 7, 2012, a California Appeals Court declared the law unconstitutional.

Since the initiative, many states including Vermont, Iowa and the latest New York, legalized gay marriage. Nationwide the push and advocacy for gay marriage continues and unlikely to stop. Many in support believe more judges are leaning towards the defense of Same-Sex Marriage, while those campaigning for the established institution of marriage, claim the issue of gay marriage and recent decisions by the courts are tactical judicial activism, whereby, judges not independent, are ruling in support of gay marriage for political gains. They believe such decisions could be left to elected officials and voters instead of the courts.

Proponents and supporters of gay marriage said the final victory would come only when Same-Sex Marriage is recognized at the Federal level. They claim gays and lesbians have the right to marry based on the 14th Amendment. Equal Protection under the 14th Amendment, defines marriage as a civil as well as religious institution. It gives married couples many Federal benefits that advocates, of gay marriage want extended to same-sex couples. On the other hand, opponents of gay marriage claim there is a legitimate rational basis for limiting marriage to heterosexual couples.

Supporters of gay marriage claimed that the legal classification according to sexual orientation, depended only on rational basis scrutiny. The question many including the Obama administration asked was shouldn’t there be a stricter scrutiny of classifications based on sexual orientation? And isn’t it right to say gays and lesbians got excluded from the equal protection guarantees of the 14th Amendment? And should gay and lesbian controversy continue as a political issue and not being considered a civil rights issue? Or is it fair to say the founders, did not envision gay marriage when they wrote the Equal Protection Clause, therefore, making the clause necessary for review?

The latest court’s decision will extend some federal benefits to same-sex couples, but it will also raise a series of major decisions for the Obama administration about how to overhaul references to marriage throughout the many volumes that lay out the laws of the United States. It shows how politicized the Supreme Court has become, since most liberal leaning Justices support striking down DOMA while the conservative bloc is against change. Critics of the justice system and opponents of the decision, see the Supreme Court as no longer independent but instead, a judicial body set up for the interests of political affiliates.

While the court’s decision on DOMA does not change any state laws governing whether same-sex couples can marry, It would allow same-sex couples that are legally married in one state to receive federal benefits that apply to heterosexual married couples. The Republican Party wholly endorsed DOMA and supports the traditional definition of marriage as the legal union of one man and one woman. The Conservative bloc thinks that Federal judges and lobbyist should not force states to recognize other kinds of marriages.

Democrats on the other hand, called for the total repeal of DOMA and want it declared unconstitutional. The Justice Department headed by Attorney General Eric Holder, made it clear it would stop defending section 3 of the Act. The court’s decision signals a gradual end to DOMA. However, just like abortion, the issue of same-sex marriage will continue as part of American politics and debate between opponents and supporters of gay marriage.