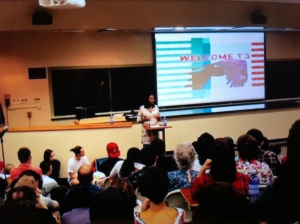 The entire nation is familiar with the slogan #BlackLivesMatter, the activist movement that prides itself in promoting social justice, ending police brutality and racial intolerance. For those unfamiliar, the group came to existence in the wake of the July 2013 acquittal of George Zimmerman in the shooting death of Trayvon Martin, an unarmed African-American teen killed in Florida.

Since its founding, the Black Lives Matter Movement, has organized rallies and protests against police abuse of power in strategic locations around the nation and in most cases, the group’s message centers on how law enforcement engage in disparate treatment of black men, relative to their White counterparts.

The Movement recently received fresh impetus from the shooting death of Michael Brown in Ferguson, Missouri and the choking death of Eric Garner in New York, all blamed on excessive use of force and police abuse of public authority. In both cases, the grand jury failed to indict the officers and no charges were brought.

On October 8, 2015 The Black Lives Matter Movement, brought its message of hope to Gettysburg College, a four year liberal art institution in Gettysburg, PA. The occasion was the 10th annual Gondwe Memorial Lecture on social and economic justice and this year, the organizer invited one of the co-founders of the movement Opalayo Tometi (Opal), a Nigerian-American as the guest speaker.

Opal began her lecture with rap music depicting the experience and feelings of blacks in America and then, using personal anecdotes, she talked to the packed Masters hall about evolution of the Movement, while she compared Trayvon Martin to her little brother whom she loves since the day he was born and wouldn’t want to experience same demise as Trayvon, a reason that inspired her activism.

The message resonated and was well received by the large audience but, while listening to Opal, I began to view her message as similar to the same struggle against racial injustice that inspired the Civil Rights Movements of the 60s and the recent Occupy Wall Street Movement set up to fight economic injustice, poverty and corporate greed.

In the cases described, the message came out and was well received by the population. However, the purpose and goal are yet to be achieved till this day or else, there’d be no need today for protests and struggle against racial bias and economic injustice in America. For The Black Lives Matter Movement not to fall in the same category and in order for the group to survive, people must begin to ask the following two questions: Does Black lives matter? And when will black lives matter in America?

The answer to the first question is simple depending on your interpretation. Objectively, Black lives matter just like White lives and Asian lives and I believe this should be the message. Subjectively, in the context promoted and championed by the Movement, black lives don’t matter and are less valuable than White lives, the real injustice the group is out to correct.

Here is where the Movement must be careful and that is on the second question: When will Black Lives, Matter in America? The answer to this question is one area, where the Movement has a shortfall in its message. Black lives will only matter in America, when blacks themselves begin to see their lives as valuable and only then, can they educate Whites that black lives matter.

Opal and her organization must not be oblivious to the issue of black- on – black crimes in America. #BlackLivesMatter, will achieve nothing unless the group begins to educate blacks on how they should value black lives. Many blacks are victims of crime perpetrated by other blacks and in such situations it is hard to get the message out that black lives matter.

Imagine the following scenario, you’re in a protest against racial injustice with a sign that says “I can’t believe I’m still protesting this sh**.” You look to your right there was a black boy and on your left a black girl, both have come to join the protest but five minutes into the demonstration, the boy was looting a pharmacy and the girl stealing from the neighborhood grocery store.

Still dealing with the shocking situation, you saw another black girl badly injured, while running from tear gas and when you pulled out your new I-phone 6 to call 911, you’re faced with the barrel of a gun pointed at your temple by a black man asking for your I-Phone. Will you still believe black lives matter to those looters? In the scenario above, the message is black lives don’t matter.

Another issue is whether we should all be colorblind and according to Opal, it is better if we’re not. Perhaps, it is okay if we’re colorblind, that way we learn to treat each individual as a person with dignity and respect than dealing with a person based on race, color, gender and sexual orientation. It is when we learn to erase the misconceived notion of color and accept people for who they are only then, will all lives matter.

The context of Opal’s message is understood and clear however, for the group to be a success, its plan must go beyond focusing on black lives relative to whites, but also on a broad agenda that includes educating blacks to value black lives.

#OccupyWallStreet was a success amid the economic crisis of 2008, the group’s campaign was on economic justice, inequality and fighting corporate greed, a move that resonated and was well accepted by the public. But today, the organization has fizzled out and become almost irrelevant because of its lack of focus, concrete mission and for poor organization.

#BlackLivesMatter must avoid same trouble, this can be achieved by not being narrow-minded with its purpose and by allowing for a broader view that incorporates educating blacks to value black lives in its plan to fight racial injustice relative to Whites. Black lives will matter in America only when blacks begin to value black lives, then we can educate and convince Whites that black lives and all lives matter.