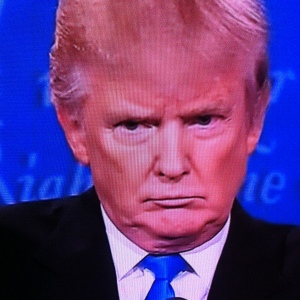 With less than a month to the election and the final debate this week, each candidate is looking to take advantage of the other’s vulnerability or missteps that could change the direction of public opinion and sway votes in favor of one candidate over the other.

The past weeks will go down as the craziest in Presidential politics with Donald Trump, showing signs of crumbling amid allegations and oppositions within his own party. The polls are not in his favor and to make matters worse, the candidate has declared war on GOP members pulling support away from his campaign. As his support evaporates, there are indications the candidate may lose. If Trump loses come November 8, his loss may be because of the followings:

A look at the level of insults this campaign season would show Trump, as the most vulgar candidate in election history. Part of his campaign promises includes building a wall to keep immigrants out and during his campaign he has called Mexicans “rapists” and “criminals.”

In 2012 after Mitt Romney lost the election, the GOP was determined to gain minority support by changing the negative rhetoric and showing it is not a party against minorities. The emergence of Trump changed all that and the message with the insults helped alienate the same electoral bloc the Republican Party hoped to bring along.

The acumen to lead is a requirement for the job and with a candidate like Trump in the oval office, some believe America would be taking the risks of putting in place a President with no skills in making proper decisions and judgment on domestic and foreign issues.

The nominee is facing a strong and adverse reaction from members of his own party. He has run his campaign as an outsider willing to do away with the establishment and the politics of Washington. Now that party members are divided over their support for Trump, it is doubtful a Trump presidency can survive the fracture within the GOP.

The list of deserters goes on and on led by the Bush clan, which not long ago declared they wouldn’t be supporting Trump. Also, there is no love between Ted Cruz and Trump, while Senator McCain recently said he would no longer vote for the Republican nominee. So far, more than 40 Republican members of Congress including Governors say they would not vote for Trump, while more are calling for the nominee to step down. With such a strong opposition within his party, it would be impossible for Trump to win key constituencies that he desperately needs to win the Presidency.

Since the sexual allegations began, nine women have presented claims of sexual improprieties against Trump. And with the election process so difficult, voters especially women can be turned away from a candidate that lacks respect for women or one that thinks he could do anything with a woman’ body without repercussions.

The entire nation recently saw the video and heard Trump brag about groping women, a powerful voting bloc no candidate wants to lose. Since the stories of his sexual misconduct came out, Trump has failed to properly apologize but instead, he blamed Bill Clinton and attacked Hillary for not supporting the women with assault allegations against the former President. Now that his poll numbers are experiencing a downward spiral, gaining back the support of women is wishful thinking as we move closer to the election.

It is normal for any candidate running for office to conduct opposition research on his candidacy. Trump has failed to do just that and with the number of allegations against him increasing, it is fair to conclude that his failure to conduct opposition research on the Trump name before running for office, led to his lack of defense against the misconduct. Perhaps, a simple Google of his name would reveal some of the allegations against him and better prepare him to protect his candidacy or withdraw from the race.

By allowing Wikileaks as an agent for his candidacy, Trump is turning support away from his campaign. Many now consider him unpatriotic for letting Wikileaks meddle in U.S. electoral process. The organization that was once a model for preventing government encroachment on basic human rights has become a political tool and not only that, it is now being used by one candidate to change the course of U.S election.

The fact that an organization that collaborates with the Russian government could hack into a Presidential campaign, with the goal to change America’ choice for President, is unprecedented and unlikely to sit well with the electorates as they prepare to vote on November 8.

Trump seems to have no faith in the U.S. electoral process. The candidate is now spreading voter fraud conspiracies, claiming the election would be rigged even before Americans get the chance to vote. So far, the nominee has no fact to back his allegations of election fraud and by propagating unsubstantiated fraud claims, Trump is beginning to look like a losing candidate, a factor likely to turn support away and make the electorates think he is insecure.

There is a general view that Trump is a bigot. One character portrayed by the candidate throughout this campaign is his inability to listen. Trump is intolerant towards those who hold a different opinion from him, which is why his campaign manager has changed twice in the past fifteen months. He likes to do things his own way even when people around him are advising otherwise. With such a leadership, he is unlikely to run a successful campaign caused by the lack of faith in his advisers.

Trump only likes the media when the polls are in his favor. In fact, no candidate has accused the media more than Trump in U.S. election history. The real estate mogul has claimed media bias numerous times and he is known to verbally attack the media at his rallies, while he is not ashamed to express his disdain for the press.

Recently, Trump said he would “end the media,” a statement many consider a threat to one of the bedrocks of the constitution, the First Amendment. By threatening the media, Trump is threatening free speech and the right of the media to diligently scrutinize a candidate for President. The media are the eyes and ears of the people and as a result should not be put at risk.

With the nation’s demography changing making it more difficult to win the Presidency without the minority vote, every candidate must do due diligence to court this important voting bloc but so far, not the case with Trump who among other issues, has a housing discrimination suit over his head.

There is a lot of baggage on Trump’s candidacy. It is now clear the candidate has written his own political obituary. Things have fallen apart for his campaign and soon, there would be nail on the coffin, before the corpse is finally laid to rest come November 8.

Like Loading...
‹ KAINE v. PENCE, WHY FACTS MATTER THIS ELECTION
THE ELECTORAL SYSTEM, HOW AMERICA ELECTS THE PRESIDENT ›