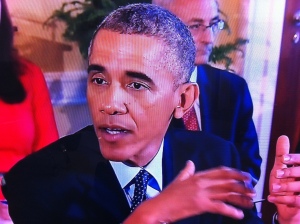 In Libya he was criticized by Conservative foes for refusing to go all in with American soldiers. Likewise, in Syria, he refused to involve U.S. troops, a decision that angered some of his oppositions in Congress. Instead, President Obama secured the help of a coalition  to set up a no fly zone in Libya and the bombing of ISIS in Syria.

President Obama has repeatedly expressed that not committing U.S. troops on the ground in a war, does not mean he will not seek a military action, if American interest is at stake or in a situation, where there is an imminent threat to the homeland. In such situations, he would be violating his oath and constitutional obligation to protect the nation if he fails to take action with the use of force.

Despite the president’s resolve many in Congress have called on Mr. Obama to go all in with American troops in Iraq and Syria. But so far, Obama has acted cautiously knowing what the outcome could be if he decides to engage U.S. Soldiers once again in Iraq, after almost a decade of war in which close to 4000 U.S. soldiers died.

With ISIS now mounting its campaign of slaughter and global security including American interests at stake, the call is coming once again from Congress especially Republicans, for the President to authorize ground troops in Iraq.

In doing what now seems like yielding to the call of Congress, President Obama is seeking a War Power, a somewhat Congressional authorization under the War Powers Act of 1973, a post Vietnam attempt by Congress to rein in Presidential authority to declare war.

However, the President did not renege on his principle of no unnecessary war. He asked Congress to restrict ability of the Commander-in-Chief to wage war against an outside enemy, something very few American leaders have done in the past.

Obama wants Congress to institute a three-year limit on U.S. action that has been conducted from the air. While the legislation would allow special operations and other small missions, it would exclude large-scale use of American boots on the ground. Also, the legislation would repeal the 2002 Congressional action that authorized President George W. Bush’s war in Iraq.

The President’s proposal to restrict his Presidential power to declare war is a strategy to gain bipartisan coöperation if he decides to take action in Syria and Iraq. He does not want to own a war that would later become unpopular and what better way to protect his legacy, than to seek approval from Congress.

The idea is that, if at all a war would be part of his legacy he’ll rather own it with Congress and be able to say the decision to go to war was not a unilateral one by the President but one based on bipartisan authority.

Another striking issue on the Presidential proposal is that, while the resolution would repeal the Bush-era expansive power of 2002, it would allow the President and whoever takes office after him the leeway to authorize military operations if needed to fight terror.

With the proposal, President Obama is not only maintaining his principle as a cautious leader, who believes in giving diplomacy a chance. He is also trying to limit involvement of U.S. military in foreign wars by seeking a Congressional approval to the effect. He wants Congress to declare war, though the President retains his authority as the Commander-in-Chief.

Obama’s War Power approach is a bipartisan move intended to avoid the Bush-era mistakes, take the blame for war from the President and shift responsibility for war declaration on Congress, while at the same time keep Presidential power to order war should Congress fail to act.

“If we had actionable intelligence about a gathering of ISIL Leaders, and our partners didn’t have the capacity to get them, I would be prepared to order our special forces to take action, because I’ll not allow these terrorists to have a safe haven,” the President said.

The measure put forward by Obama, is a strategy and continuation of his war doctrine of limited involvement but precise action when necessary. The approach, once again not only show Obama as a decisive leader, but also a thoughtful one at best. It is now unclear if Congress will see it the President’s way and give in to his bipartisan design.

Like Loading...
‹ ARMING UKRAINE WILL DEVASTATE THE PEACE PROCESS
AMERICA NOT AT WAR WITH ISLAM BUT WITH TERROR AND EXTREMISM ›