AMERICA NOT AT WAR WITH ISLAM BUT WITH TERROR AND EXTREMISM 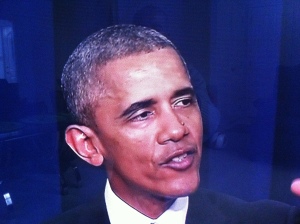 The West is at war with terror not Islam. To think otherwise is misguided as true Muslims worldwide are denouncing ISIS and Al Qaeda, calling both and other extremist groups, terrorist organizations with the agenda to misbrand a religion they hold dearly and revere as peaceful.

President Obama sounded the same tone, as he called for a global effort to fight violent extremism, while he urged countries around the world to discuss the root causes that inspire groups like ISIS and Al Qaeda.

The idea that this is a war against Islam will do nothing to change the situation on the ground. Such a label will turn Western allies in the region against efforts to end the scourge of terror. Countries like Saudi Arabia, Qatar, Jordan and Bahrain, have all spoken against ISIS and associating their religion with conducts of ISIS, will do nothing to include them in the solution.

Calling it a war against Islam will not only give ISIS the recognition it wants, it would legitimize the grievances that groups like ISIS and Al Qaeda nurse, the notion that the West is against Islam. Such a general term could strengthen ISIS and give it unwarranted support from Muslims in the Arab world, who might think the West is out against Islam.

The beheadings of the past months and atrocities committed by ISIS, are making many Muslims wary of the group and its purpose. Muslims are beginning to disassociate themselves from the extremist form of Islam that has become the signature of ISIS and have come to realize that most victims of ISIS’s barbaric killings are themselves Muslims.

The worst the West can do is to fall into the trap set by extremist groups to create a commotion premised on falsehood between the West and the Arab world. No doubt that radical form of Islam is a problem, but that fact, is not a conclusion that Muslims around the world support religious extremism and unnecessary murders, as a tool against Western ideology.

The root causes of terror are perhaps not the lack of economic opportunities and poverty as President Obama asserted, during White House Summit Against Extremism. Facts show that Osama Bin Laden and some of the hijackers of 9/11 came from affluent Saudi families. Many of those joining radical groups today, are from wealthy backgrounds with some even educated in the West.

The widespread of terror is linked to the teachings and extremist theological ideology that has become common in most of the Arab nations. In places like Pakistan, Indonesia and Saudi Arabia, Madrasas and religious schools, teach extremist form of Islam with impunity. Children are brainwashed into believing the rest of the world is against Islam. To make the situation worse, such schools receive funding from the government and lack supervision, where the leadership should crack down on extremist teachings.

Muslim clerics are not doing enough to push back on the twisted interpretations of Islam. Likewise, religious and civic leaders continue to promote the idea that the U.S. hates Muslims and considers all Muslims terrorists, the notion of West versus the Arab world as a clash of civilization.

Besides extremist teachings, another factor fueling terror is the Palestinian question. As long as Palestine remains a marginalized part of the world, it is unlikely the war against terror would end. There are those who believe the decision to deny Palestine statehood is a Western conspiracy and determination to protect Israeli interests at the cost of Palestinians.

Terrorists like ISIS are seeking support from Muslims around the world and are desperate for legitimacy, which they get when Palestinian children and women die in a war with Israel.

The asymmetrical war in which Israel always prevail and failure of the U.S. and its Western allies to secure a lasting solution to Palestinian statehood, has become a breeding ground for radical Islam and a recruiting tool for terror groups like ISIS and Al Qaeda.

Ending terror and extremist ideology is a long shot but there are things the West can do to limit the scourge. Labeling ongoing campaign on terror a war against Islam is not one of them. The U.S. and its Western allies must pull off funding for nations that encourage the teaching of radical Islam. They must encourage such nations to feel secure enough to reform their education. Also, they must find a lasting solution to the Palestinian issues and perhaps then, the world can find some peace.