Not the Attorney General but a threat to the judicial system

In defiance of Congress, the Attorney General Bill Barr refused to appear before the House to answer questions on his summary of the Mueller report. This week, he testified before the Senate Judiciary committee after news broke that the Special Counsel sent a letter to Barr in late March expressing his disagreement with the way Barr mischaracterized the Mueller report.

In April, Barr testified before Congress and when asked if he thinks Mueller agree with his four-page summary of the report, he claimed he doesn’t know if he did. What he failed to tell Congress at the time was the letter to the contrary he received from Mueller before his session with Congress.

By failing to inform Congress about the letter, Barr may have lied under oath and if the Attorney General of the United States is not telling the truth before Congress, it is a crime and impeachable offense.

The only reason Barr gave for failing to appear before the House was to say he did not want to be interviewed by Committee Attorneys. Unfortunately, he seems to be getting support from some GOP members of the House Judiciary committee, who are quick to blame democrats for Barr’s decision not to appear.

In 2018 during confirmation hearing for Justice Kavanaugh, his accuser Blasey Ford sat for hours before a Senate committee, where an Attorney, hired by GOP Senate members, grilled her. Despite push back by democrats, there was still consensus for Mrs. Ford to testify which she did. It is hypocritical that the same people, who hired an Attorney to interview a victim of sexual assault, are now against having the same done to the Attorney General.

Since his appointment as the nation’s chief law enforcement officer, Barr did not depart from what many feared, his belief in Presidential power and his determination to help Trump bypass the rule of law. Besides his 19-page memo where he said the President cannot be guilty of obstruction of justice, Barr’ 4-page summary of the Mueller report in which he misinformed the American people, is a clear indication he has abandoned his role as the nation’s Attorney General to be a defender of Trump.

He has taken side in support of the administration’s immigration policy of separating families and the hardline approach to ending ObamaCare, the healthcare program from which more than 20 million uninsured Americans have benefited. The recent move was a petition to court this week by the administration to destroy the healthcare system in its entirety.

Barr’s decision to exonerate the President of obstruction of justice, when the Special Counsel report clearly states no exoneration but instead deferring the question to Congress, is a slap on the justice system. He acted political by coming to a conclusion, when it was the duty of Congress to act. By choosing a different roadmap from that provided by Mueller through Congress, shows how much Barr is willing to take the law into his own hands to vindicate Trump. 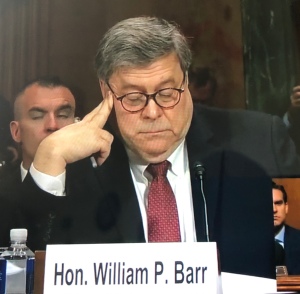 “There is now public confusion about critical aspects of the results of our investigation. This threatens to undermine a central purpose for which the Department appointed the Special Counsel: to assure full public confidence in the outcome of the investigations,” Mueller said in a March 27 letter, according to the post.

Many people now believe the Department of Justice has become an arm of the White House, thanks to the corrupt way the Attorney General chose to handle the Russia investigation. Some members of Mueller’ team think that the evidence they gathered, especially on obstruction was far more alarming and significant than how Barr had described it. That was not a surprise considering how Barr reduced a 448-page report to a 4-page memo.

Barr’s refusal to testify before the House goes against the framers’ intention, when they created the three branches of government as co-equal. It is in violation of the rule of law and a breach of the founders’ purpose of checks and balances, the principle that one arm of government shall act as a check on another to prevent the abuse of power.

We now have a President that thinks he is above the law because he has the Attorney General ready to do his wish. The President has defied Congress by refusing to handover his taxes with the backing of Barr. He refused to testify before Mueller when summoned and yet, nothing happened.

The Attorney General also refused to send unredacted Mueller report to Congress despite call to do so. He is unwilling to appear before the House with oversight duties even under the threat of subpoena. And he has decided not to release to Congress the notes about calls with Mueller.

It is fair to say we are in a constitutional crisis. The President believes he is above the law and the Attorney General is acting like the President’s Counsel hired to defend his decisions. These are signs of a dictatorship though some are unwilling to admit the reality.

Bill Barr has violated his oath to the American people and therefore, a threat to the judicial system. The Republican Senate has become willfully blind to the abuse despite all the evidence. It remains for a democratic Congress especially the House, to do all within its power to incapacitate this gross violation of the rule of law.

Like Loading...
‹ Why worry after the Mueller report
Alabama’ Abortion law is a provocation of Roe v. Wade ›